The Austin-Healey Sprite mk1 was a small British car built from the late 1950s to the early 1960s.

the Sprite MkI launched in 1958 was an extremely spartan roadster : it lacked bumpers, external handles, side windows and soft top (there was a simple tonneau cover). The floor inside was covered with rubber.

The Austin-Healey Sprite is a compact open sports automobile introduced to the press at Monte Carlo by the British Motor Corporation (BMC) on May 20, 1958, just before the Monaco Grand Prix of that year. It was designed to be a low-cost model that "a chap might keep in his bike shed" while also serving as a replacement to the pre-war Austin Seven sporty models. The Donald Healey Motor Company, which got a royalty payment from the manufacturers BMC, designed the Sprite. It was first sold for £669 and used a mildly tweaked version of the Austin A-Series engine as well as as many current automobile components as possible to keep costs down.

The Sprite was built at the MG sports car facility in Abingdon, and it was unavoidable that the design's popularity would result in an MG variant known as the Midget, resurrecting a successful pre-war model name.
When not in use, the car's designers planned for the headlights to be retracted, with the lenses facing skyward. However, due to BMC's cost-cutting, the flip-up mechanism was removed, and the headlights were simply placed in an upright position, giving the car its most recognisable characteristic. Gerry Coker designed the body, which was then tweaked by Les Ireland.The problem of providing a rigid structure to an open-topped sports car was resolved by Barry Bilbie, Healey's chassis designer, who adapted the idea provided by the Jaguar D-type, with rear suspension forces routed through the bodyshell's floor pan. The Sprite's chassis design was the world's first volume-production sports car to use unitary construction, where the sheet metal body panels (apart from the bonnet) take many of the structural stresses. The two front chassis legs projecting forward from the passenger compartment mean the shell is not a full monocoque however. The front sheet-metal assembly, including the bonnet (hood) and wings, was a one-piece unit, hinged from the back, that swung up to allow access to the engine compartment. The 43 bhp, 948 cc OHV engine (coded 9CC) was derived from the Austin A35 & Morris Minor 1000 models, also BMC products, but upgraded with twin 1⅛" inch SU carburettors. The rack and pinion steering was derived from the Morris Minor 1000 and the front suspension from the Austin A35. The front suspension was a coil spring and wishbone arrangement, with the arm of the Armstrong lever shock absorber serving as the top suspension link. The rear axle was both located and sprung by quarter-elliptic leaf springs, again with lever-arm shock absorbers and top links. There were no exterior door handles; the driver and passenger were required to reach inside to open the door. There was also no boot lid, owing to the need to retain as much structural integrity as possible, and access to the spare wheel and luggage compartment was achieved by tilting the seat-backs forward and reaching under the rear deck, a process likened to potholing by many owners, but which resulted in a large space available to store soft baggage.

In 1965 Austin-Healey developed a racing version of the Sprite with the BMC Competition Department  The bodywork was made more aerodynamic after numerous tests in the wind tunnel, a configuration designed specifically for the straights of Le Mans. The lighting system was enhanced with four lights behind a Plexiglas structure. In the center of the front there were two small wings to convey the air towards the radiator. The front suspension was double wishbones. The BMC powerplant had a Weber carburetor, which made it over 100 hp. The five-speed manual gearbox was the MG B. The car weighed 610 kg.

In the first race, the 12 Hours of Seabring, it was led by Rauno Aaltonen and Clive Baker. 37th on the grid, the Sprite closed the 15th and second race in the 2-liter class. It was later entered in Le Mans, where Aaltonen and Baker were joined by the second car of Paul Hawkins and John Rhodes. The former were forced to retire, but the latter, who started 44th, finished 12th overall and first in class. The Sprite was used until 1968, obtaining the class victory again in that year. 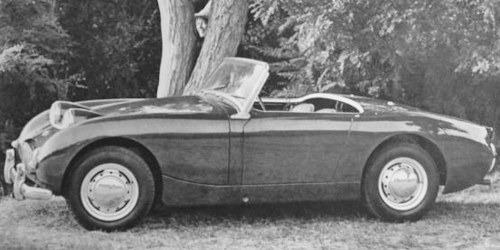