The AMC Matador is a mid-size car that was built and sold by American Motors Corporation (AMC) from 1971 to 1978. The Matador came in two generations: 1971 to 1973 and a major redesign from 1974 to 1978. The second-generation four-door and station wagon models were classified as full-size cars and did not share the distinctive styling featured by the Matador Coupe that was introduced in 1974.

Factory-backed AMC Matador hardtops and coupes competed in NASCAR stock car racing with drivers that included Mark Donohue and Bobby Allison wining a number of the races. The new Matador Coupe was featured in The Man with the Golden Gun, a James Bond film released in 1974. AMC Matadors were a popular vehicle in the police market as it outperformed most other police cars. It was also featured in many television shows and movies during the 1970s.

The Matador became AMC's largest automobile following the discontinuation of the flagship AMC Ambassador that was built on the same platform. Premium trim level Oleg Cassini and Barcelona versions of the Matador coupe were positioned in the "personal luxury car" market segment. Matadors were also marketed under the Rambler marque in foreign markets, as well as assembled under license agreements with AMC that included Vehículos Automotores Mexicanos (VAM), as well as built in right-hand-drive versions by Australian Motor Industries (AMI) and by Campbell Motor Industries (CMI) in New Zealand.

The Matador replaced the AMC Rebel, which had been marketed since 1967. With a facelift and a new name, the AMC Matadors were available as a two-door hardtop as well as a four-door sedan and station wagon. The Matador was based on AMC's "senior" automobile platform shared with the full-size Ambassador line.

The sedan and wagon models "offered excellent value and were fairly popular" including as a prowl car. Matadors were offered to fleet buyers with various police, taxicab, and other heavy-duty packages. Government agencies, military units, and police departments in the U.S. equipped Matador sedans or wagons with 360 cu in (5.9 L) or 401 cu in (6.6 L) V8 engines.

The Matador received a redesign in 1974, in part to meet new safety and crash requirements, as well as a completely different model "to contend with the bull market for plush mid-size coupes that sprang up after the end of the muscle car era."

American Motors advertising assured that the new Matador was not just a name change and facelift, but in reality, it was the 1970 Rebel restyled with a longer front clip and a new interior. The 1971 model year Matadors acquired a "beefier" front end look for all three body designs: 2-door hardtop, 4-door sedan, and station wagon. The AMC Matador shared its basic body design from the firewall back with the Ambassador, which was built on the same platform, but had a longer wheelbase and front end sheetmetal, a formal grille and luxurious trim, as well as more standard equipment that included air conditioning.

While "Matador" may have been a move away from connotations of the Confederacy inspired by the rise of the Civil Rights Movement, it did not help solve the obscurity problem, as AMC adopted a "What's a Matador" advertising campaign.This self-disparaging marketing campaign "turned the styling of anonymity into an asset." Consumer-research polls conducted by AMC found it meant virility and excitement to consumers. However, American Motors ran into problems in Puerto Rico. Matador turns out to have connotations for "killer" on the island where bull-fighting was abolished when the U.S. took control of Puerto Rico.

The Matador station wagons had an available rear-facing third row bench seat increasing total seating from six to eight passengers. In addition, all wagons included a roof rack and a two-way tailgate that opened when the rear window was down either from the top to serve as an extended flat surface even with the load floor, or to swing open like a regular door hinged on the left side.

The Matador came with straight-6 or a number of V8 engines. Transmissions for the Matador included the Borg-Warner sourced "Shift-Command" 3-speed automatic, and a column shifted 3-speed manual or a floor shifted 4-speed manual (for 1971 only).

Changes to Matadors were minor until the 1972 model year when the innovative AMC Buyer Protection Plan was introduced. This was the automobile industry's first 12 month or 12,000 miles (19,312 km) bumper-to-bumper warranty. American Motors started with an emphasis on quality and durability by focusing on its component sourcing, improving production that included reducing the number of models, as well mechanical upgrades and increasing the level of standard equipment.This was followed by an innovative promise to its customers to repair anything wrong with the car (except for tires). Owners were provided with a toll-free number to the company, as well as a free loaner car if a warranty repair took overnight. The objective was to reduce warranty claims, as well as achieve better public relations along with greater customer satisfaction and loyalty.

A major design change was introduced with the 1974 models for both the sedan and wagon, while the two-door became a separate and radically styled coupe. These could be considered the "second generation" Matadors. New passenger car requirements set by NHTSA called for the front and rear passenger car bumpers to have uniform heights, take angle impacts, and sustain 5-mile-per-hour (8 km/h) impacts with no damage. The 1974 AMC Matadors accomplished this with massive bumpers. The four-door sedans and wagons received a new front fascia with a hood and grille featuring a prominent central protrusion that followed the front bumper shape. Matadors with this front fascia are sometimes nicknamed "coffin noses".

Second generation sedans and station wagons continued over all the model years with only minor trim and equipment changes. Powertrains were basically unchanged for all the 1974 to 1978 Matadors. Either an inline six or V8 engines were available with a three-speed automatic transmission. A three-speed manual column-shift transmission was also available with the six-cylinder engine from 1974 to 1976. For 1977 and 1978, all Matadors came standard with the automatic transmission.

A road test by automobile journalist Vincent Courtenay of the 1974 Matador station wagon "praised its performance, handling, and fuel economy considering its size and 360 CID engine." He described it as "a real sleeper on the market. Its performance ranks it in the first line of cars, yet it's reasonably priced."

Changes for the 1975 model year were minor as AMC focused on the development and introduction of its innovative Pacer, but Matadors now included a standard "no maintenance" electronic ignition developed by Prestolite. All U.S. market Matadors featured catalytic converters that required the use of unleaded regular-grade fuel. New "Unleaded Fuel Only" decals were placed by the fuel filler door and on the fuel gauge. Steel-belted radial tires were now made standard equipment on all Matadors.

American Motors' executives saw an opportunity to replace the "uninspired" Matador two-door hardtop with a new design to capture people looking for exciting, sporty styling in a market segment that was outpacing the rest of the automobile market; and were looking to answer the demand for plush mid-size coupes after the end of the muscle car era.

The 1974 model year introduced an aerodynamically styled fastback coupe with pronounced "tunneled" headlight surrounds. The Matador coupe was the only all-new model in the popular mid-size car segment. The coupe was designed under the direction of AMC's Vice President of Styling, Richard A. Teague, with input from Mark Donohue, the famous race car driver. AMC's Styling Department had greater freedom because of a decision to design the new Matador strictly as a coupe, without the constraints of attempting to have the sedan and station wagon versions fit the same body lines. Reportedly Teague designed the coupe's front as an homage to one of the first AMCs he designed, the 1964 Rambler American.Many were amazed that AMC came up with the fast, stylish Matador, considering the automaker's size and limited resources.

The coupe's wind-shaped look was enhanced by a very long hood and a short rear deck. The Matador coupe stands out as one of the more distinctive and controversial designs of the 1970s after the AMC Pacer. The Matador coupe was named "Best Styled Car of 1974" by the editors of Car and Driver magazine. In contrast to all the other mid-sized and personal luxury two-door competition during the mid- to late-1970s, the Matador coupe did not share the requisite styling hallmarks of the era that included an upright grille, a notchback roof, and imitation "landau bars" or opera lights. A Popular Mechanics survey indicated "luscious looks of Matador coupe swept most owners off their feet" with a "specific like" listed by 63.7% of them for "styling".

Sales of the coupe were brisk with 62,629 Matador Coupes delivered for its introductory year, up sharply from the 7,067 Matador hardtops sold in 1973. This is a respectable record that went against the drop in the overall market during 1974 and the decline in popularity of intermediate-sized coupes after the 1973 oil crisis. After it outsold the four-door Matadors by nearly 25,000 units in 1974, sales dropped to less than 10,000 in 1977, and then down just 2,006 in the coupe's final year. Nearly 100,000 Matador Coupes in total were produced from 1974 through 1978.

American Motors executives, including Vice President of Design Richard A. Teague, described design plans for a four-door sedan and station wagon based on the coupe's styling themes that did not reach production.

In 1976, a "Barcelona" option offered an alternative to the personal luxury cars offered by other automakers such as the Chrysler Cordoba and Chevrolet Monte Carlo. For 1977 and 1978, the "Barcelona II" coupe featured a padded Landau roof and opera windows, styling cues that were required at that time by buyers in the highly popular two-door "personal luxury" market segment. At first it was available in only one distinctive two-tone paint pattern consisting of Golden Ginger Metallic with Sand Tan. In 1978, the Barcelona came in a second color scheme: an Autumn Red Metallic on Claret Metallic combination.

For its final production in 1978, the Barcelona model was also available on the Matador four-door sedan.

Motor Trend magazine road tested a 1977 Barcelona II coupe and found it to be equal to all in the objective areas, as well as one of the most distinctive vehicles on the road that "makes a good deal of sense" ... "if you're nor put off by the Matador's unique lines."

As part of a significant product placement strategy, an AMC Matador coupe played a starring role in a James Bond film that was released in 1974.

The Man with the Golden Gun features the newly introduced coupe - along with Matador 4-door police cars (painted in the black and white livery used by the Los Angeles Police Department) and a Hornet X hatchback. This was Roger Moore's second appearance as the British secret agent. The Matador is the car of Francisco Scaramanga, and along with Nick Nack, they use the "flying" AMC Matador to kidnap Mary Goodnight and make their escape. "Bond is foiled by perhaps the best trick a getaway car has ever performed" as the Matador transforms into a plane to fly from Bangkok to an island in the China Sea. The whole automobile is turned into a light airplane when wings and a flight tail unit are attached to the actual Matador coupe (that served as the fuselage and landing gear). The idea was based on the Taylor Aerocar design of a roadable aircraft.The machine for this Bond movie was 9.15 metres (30 ft) long, 12.80 metres (42 ft) wide, and 3.08 metres (10 ft) high A stuntman drove the "car plane" to a runway. The machine was not airworthy and could only make a 500-metre (1,640 ft) flight, so a meter-long (39-inch) model was used for the film's aerial sequences. The scenes show the remote controlled scale model built by John Stears.

According to some critics, the movie "didn't offer much to recommend it other than the clever use of cars" such as the conversion of car into an airplane. The "flying AMC Matador" machine was exhibited at auto shows. It was part of AMC's marketing efforts for the aerodynamically designed coupe, as well as publicity exposure for the concept of unique flying machines. 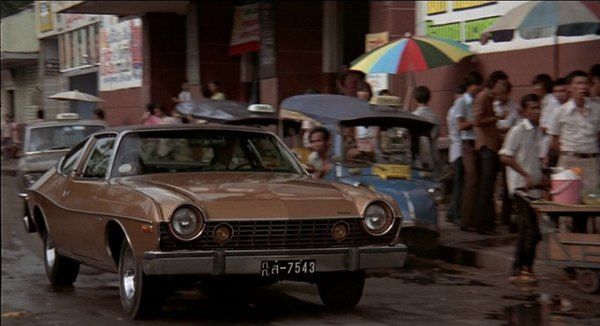