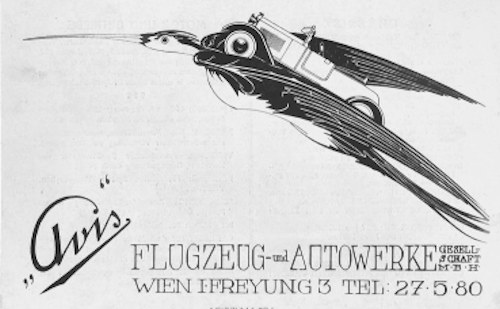 The Avis plane and automobile works GmbH, was a manufacturer of automobiles and airplanes from Austria in the 1920s.  The brand name was Avis.

The company Technische Workstation GmbH was founded on April 12, 1921 in Vienna.  On July 15, 1924 the name was changed to Avis Flugzeug- und Autowerke GmbH. The company headquarters were now in Brunn am Gebirge .

1921 began the production of automobiles, developed by Franz Dozekal.  From 1924 also aircraft built. 1931, the company was dissolved.

The company produced cars. The choice was between different bodies, including a coupe de Ville. Thus, the vehicles were also used as taxi used.  For the drive was provided by a 798cc water-cooled two-cylinder engine. The 4/20 hp Type 5 had a larger 1096cc engine wheelbase and a larger track width than the Type 3.