The Z1 featured doors which dropped down into the door sills.All the Z1s were left-hand drive, except the final one assembled, which was right-hand drive. It was the only 2.7L version of this car.

The first example of the Z1 was released by BMW to the press in 1986 and later officially presented at the 1987 Frankfurt Motor Show. Initial demand was so fierce that BMW had 5,000 orders before production began. However, demand dropped significantly around 1988 and BMW ended production in 1991.

The BMW Z1 was designed over a three-year period by an in-house division of BMW Forschung und Technik GmbH. The development of the Z1 is attributed to Dr. Ulrich Bez, not to forget the core of his team at BMW Technik GmbH (Harm Lagaay, Alexander Pregl, Rudolf Müller, Lutz Janssen, Wolf-Henryk Menke, Dieter Schaffner, Klaus Faust, Sabine Zemelka, Patrick Ayoub and Stephan Stark). Control of the project was turned over to Dr. Klaus Faust when Bez left for Porsche in October, 1988.

The BMW Z1 was used to develop and debut several technologies. BMW's high-intensity discharge lamp, integrated roll-bar, door mechanism, and underbody tray.The Z in Z1 originally stood for Zukunft (German for future) and would later be used on other cars in the line: the Z3, Z4, and Z8). All of these vehicles (including the Z1) are two-door roadsters (

The chassis was specially designed for the Z1 and features a number of innovative features: removable body panels, continuously zinc welded seams, a composite undertray, and the unusual dropped doors. Parts of the car (including the engine, gearbox, and front suspension) were borrowed from the BMW E30 325i, but the Z1 remains largely original.Both the engine (the BMW M20B25) and the five-speed manual gearbox (the Getrag 260/5) were sourced from the E30 325 IX. The 2.5 L (2,494 cc) 12-valve SOHC straight-six engine sits tilted 20 degrees to the right to accommodate the low hoodline. The engine produces 170 hp (127 kW) at 5,800 rpm and 222 N·m (164 lb·ft) of torque in its original form. Several tuners have programs for increasing the performance of the Z1 by either upgrading or replacing the engine.

The rear suspension, called the Z Axle, was specially designed for the Z1. It was one of the first BMWs to feature a multi-link design. In the 1990s, the Z-axle would be used on a variety of BMW Group vehicles, including the E36 BMW 3-Series and the R40 Rover 75.

The body was made from plastic and could be removed completely from the chassis. The side panels and doors are made of General Electric's XENOY thermoplastic. The hood, trunk, and roof cover are GRP components made by Seger + Hoffman AG. The car is painted in a special flexible lacquer finish developed jointly by AKZO Coatings and BMW Technik GmbH.

During the Z1s launch, BMW suggested that owners purchase an additional set of body panels and change the color of the car from time to time. The car could actually be driven with all of the panels completely removed. BMW noted that the body could be completely replaced in 40 minutes.

The entire vehicle was designed with aerodynamics in mind. The floor is made of fiber-reinforced materialand is completely smooth from below. It is glued and screwed into the chassis.The steel chassis compared to a non-galvanized. increased the torsional rigidity by 25% Specifically, the entire undertray is completely flat and the muffler and rear valance were designed as integral aerodynamic components to decrease turbulence and rear lift. The front end reportedly induces a high-pressure zone just forward of the front wheels to increase front-wheel traction. 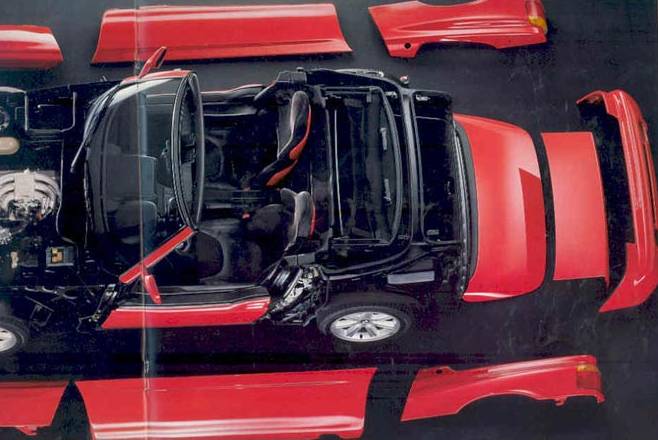 The doors did not contribute to the stability of the body and could be lowered into the side sills so that it was possible to drive with the doors open.

The doors retract vertically down into the car's body instead of swinging outward or upward. The Kaiser Darrin was the first car to have retractable doors, they slid forward into the front fenders. The inspiration for these doors came from more traditional roadsters which often feature removable metal or cloth doors. Because removable doors did not fit within BMW's design goals, the retractable doors were installed instead.

The body with its high sills, offers crash protection independent of the doors, the vehicle may be legally and safely driven with the doors up or down, although they are not legal in the U.S.

The windows may be operated independently of the doors, although they do retract automatically if the door is lowered. Both the window and door are driven by electric motors through toothed rubber belts and may be moved manually in an emergency.

BMW only produced 8,000 Z1 models. The majority of these (6,443) were sold in BMW's native German market.The country to receive the second-greatest number of Z1s, Italy, received less than 7% of the total sold domestically. BMW was reportedly unable to build more than 10 to 20 Z1 vehicles each day. None were initially sold in North America, although examples have been independently imported since the car's launch.

More than half of all Z1 vehicles (specifically, 4,091) were produced for the 1990 model year. Seventy-eight Z1 vehicles were reportedly used as test mules, although most were later sold without a warranty and, presumably, at a lower price.

The Z1 was available in six exterior colours and four interior colours, although the vast majority (6,177) were red, black, or green with a dark grey interior. Light yellow exterior (fun-gelb in German or fun yellow in English; 133 examples made) or red interior (38 examples made) are the rarest Z1 colours. The colours swimming pool blue and oh-so-orange were reserved for the car's designers, Bez and Lagaay.

Reportedly, some 1,101 Z1 vehicles were delivered without a factory radio installed. In these vehicles, BMWS AG installed an aftermarket Sony radio in its place.

BMW Z1 vehicles officially imported to France for sale there have yellow headlights instead of the clear ones found elsewhere.

ALPINA also produced a version of the Z1, named the RLE (Roadster Limited Edition) of which only 66 were made. Half of the production was exported to the Japanese market while the other 33 remained in Europe. ALPINA's enhancements decreased the 0-62 mph time to 7.1 seconds and increased the top speed of the RLE to 231 km/h. 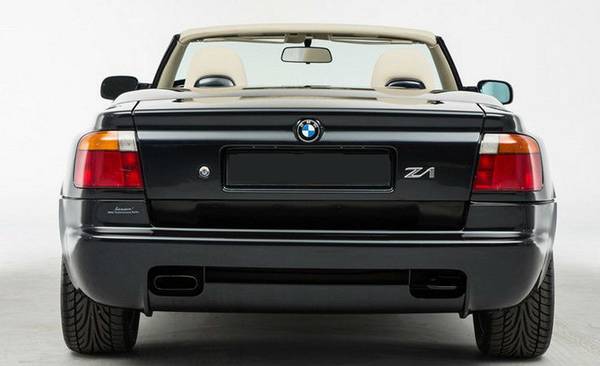