The BMW New Six is a line of six-cylinder luxury cars produced by the German automaker BMW from 1968 to 1977. The series, which used the M30 engine, was introduced as a response to the Mercedes-Benz-dominated large luxury car class and was very important in establishing BMW's reputation as a maker of sporting, luxury sedans. A two-door coupé version was produced alongside. Racing versions of the coupé enhanced BMW's reputation in auto racing. The sedans had the internal name E3, while the coupés are E9.

After a long hiatus, BMW decided to once again develop a six-cylinder car in the early nineteen-sixties. Work on what was to become the E3 commenced in 1965. The engine was closely based on the existing fours, sharing their overall layout while not being merely a simple addition of two more cylinders. The design team was led by Wilhelm Hofmeister, with some detail work executed by Italy's Bertone and Michelotti studios. A particular goal was to allow for more passenger space and comfort than what the earlier "Neue Klasse" saloons had been able to offer. Still, the new sedan was noticeably still a "driver's car", focusing on the front-seat occupants, and the smaller coupé was only barely a full four-seater.

A new styling feature was the twin headlights, set into the grille, a design which was to define BMW front styling for decades to come. Early mockups of the E3 actually featured broad rectangular single headlamps with rounded corners, but these never made it into production - perhaps as a result of the lukewarm reception of the similarly designed 2000 CS. The new car also required a new welding plant to be built at BMW's Munich site. In spite of the car's all new construction it only cost 70 million D-mark to develop; this was less than half of what one might have expected at the time.

Models were given names denoting their engine sizes, and suffixes to indicate the long-wheelbase (L) and fuel injection (i) available on later cars. The coupés were all named CS, followed by i (for fuel injection models) or L (for light-weight models, which also had fuel injection and higher power).

The two initial models, introduced in 1968 and sold through 1977, were the 2.5 L 2500 and 2.8 L 2800. The airy design was roomier than BMW's existing range and appeared rather large, in spite of being no more than 1 cm (0.4 in) longer than Mercedes' midrange sedans, which were generally considered to compete in a lower class than the new E3. They were large six-cylinder cars that handled well and impressed contemporary reviewers. Road & Track called the later Bavaria "delightful" and "superb", concluding that it was "one of the world's best buys". Aside from the larger engine, the 2800 also had bigger tyres and a somewhat sportier suspension, as well as various creature comforts such as a heated rear window, a full tool set, Boge Nivomat self-levelling rear suspension, and a smattering more external chrome.

The big-bore, dual-carbureted 3.0 S was introduced in 1971, being a more powerful and expensive model than the 2800; a fuel-injected version was also made. Also produced were long-wheelbase L models (3.0L, 3.3Li, etc.), whose sharp handling was a stark contrast to the large Mercedes-Benz models of the time. Langley Motors in Thames Ditton UK also produced an estate (tourer) version. With a fully independent suspension along with four wheel disc brakes, the E3 was well ahead of its time in the early 1970s. Surprisingly quick, the 3.0 Si sedan was faster than the 3.0 coupe; which was a heavier car by 50 kg, with the same engine configuration.

The body was surprisingly light for its size, weighing less than the smaller E9 coupé. Vision is also good, with narrow pillars and no less than 2.5 m2 (27 sq ft) of overall glass area.

At the end of 1973 the new, larger 3.3 L was presented, going on sale in January 1974. It had the longer wheelbase and a bigger engine, although the power was no more than that of the 3.0 Si. Instead, more torque meant to provide a more luxurious rather than BMW's usual sporting feel. This engine was updated to fuel injection in June 1975, with a few more horsepower. Subsequent to the introduction of a 3.2 liter version of this engine in the 1976 BMW 633CSi, this slightly smaller model found its way into the 3.3 Li as well. The E3 Sedan was in production from 1968–1978, with a total of circa 190,000 cars produced. Of these, 71,804 were of the US-only "Bavaria" model.

In the US market, the 2500 and 2800 were introduced in 1969. The 2500 was shy of many of the luxury features included in the 2800, and with the smaller engine, it sold for about $5600 in 1970. The 2800 sedan was heavily optioned with such things as full leather interior, power windows, and power sunroof, which its price of $6,874 reflected. For the 1971 model year Max Hoffman, the BMW importer for the USA, convinced BMW AG to build the 2500 configuration car but use the 2800 engine — i.e. the classic "American hotrod" formula of taking the lower option, lighter weight chassis and fitting the largest engine. This new E3 configuration was called the "Bavaria" and was unique to the US market. Priced at about US$5,000, considerably less than the $6,874 of its full-featured predecessor the 2800, the 1971 2500 and 2800 were soon replaced by the new Bavaria. The Bavaria is generally considered the forebear of the modern BMW high-performance sedan as it combined excellent acceleration, good fuel economy, plenty of room for four people and a large trunk. The majority of them were sold with a four-speed manual transmission, reflecting the sporting nature of the sedan.

In 1975 BMW introduced fuel injection to the US market for the big-six M30 motor replacing the twin two-barrel Zenith carburetors used on the M30 motor since its inception. The Bavaria was dropped from the line-up, and the 3.0Si was now the highest end of the BMW model range (the "i" added to the 3.0S to designate fuel injection). The bargain end of the 6-cylinder sedan range was now the newly introduced E12 530i. The fully optioned 3.0Si was sold during the 1975 and 1976 model years. 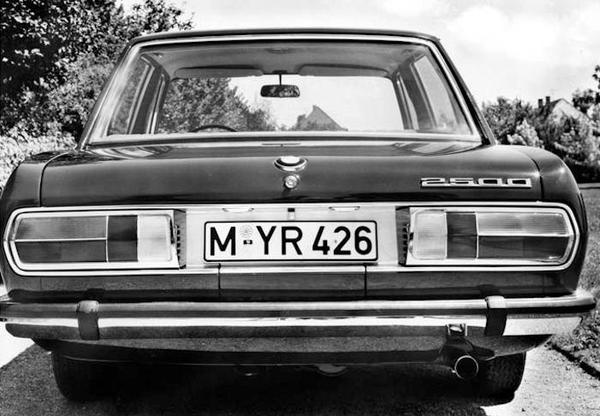