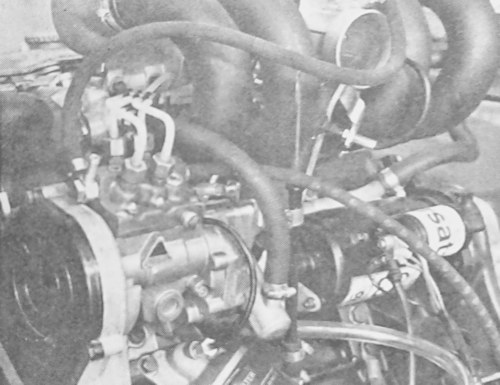 The BMW 2002 Tii 2-litre engine with Kugel- Fischer fuel injection, the power output is 130 bhp (DIN) at 5.800 rpm compared with 100 bhp on the normal carburettor version. Top speed is claimed to be 120 mph There is quite a step in the torque curve. which peaks at 4.500 rpm. Final drive ratio is raised from 3.64 to 3.45 to 1 and the wheels have wider rims (5in. instead of 4.5in.) with the same size (165-13in.) radial- ply tyres.
The price new with tax was £2,295, £421 more than that of the 2002.The four-plunger injector pump for the Kugeffischer injection uses nylon supply pipes Drive for the pump is totally enclosed. Air intakes take the form of four separate moulded rubber hoses

From spring 1971 there were also hatchback variants with the names BMW touring as the top model the touring 2000 tii. At 4.11 m in length, the touring was shorter than the notchback model.

With the facelift in August 1973, the model designation changed, the designation touring was no longer put in front and the type designation was appended with the 2 that was already usual for the sedan, so, the touring 2000 became the 2002 touring and from the 2000 tii touring to the 2002 tii touring.

A very rare variant the BMW 2002ti Diana is the so-called 02 Diana. On the occasion of his marriage to Diana Körner in 1970, the racing driver Hubert Hahne had twelve 2002 ti cars converted as a kind of wedding present – ​​including with twin headlights from the BMW 2800 CS, leather interiors and special Italian aluminium wheels. Each of the twelve copies was painted in a different colour. Four Diana’s are known to have survived, including a Diana Cappuccino.

The abbreviations "ti" (Turismo Internazionale) or "tii" (Turismo Internazionale Iniezione or "Injection") designate the more powerful versions of the M10 engine in the BMW 02. There were three variants:The ti models have 40s Solex twin carburettors, 2002 tii and 2002 turbo have an engine with mechanical Kugelfischer fuel injection, as was also used at that time by Peugeot or in racing, but there mostly in connection with a single throttle or flat slide system instead of the standard throttle valve.