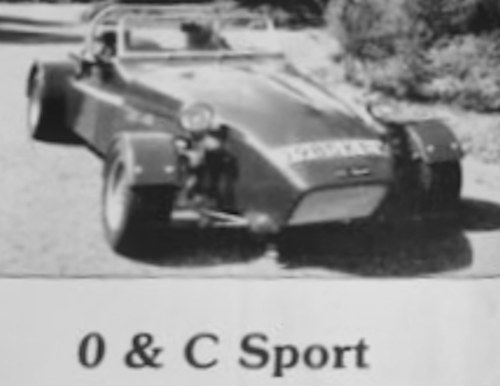 O & C Products was a British manufacturer of kit cars from the 1980s.The brand name was O & C .

O & C stood for owners Oldham and Crowther.  Ruth Oldham and Martin Crowther founded the company in 1984 in Peterborough. They started with the production of cars as kits.

The first model was the sport. This was the replica of the Lotus Seven. The choice was four-cylinder engines from Morris Minor, Morris Marina, Toyota Corolla and Toyota Carina. Between 1984 and 1988 created about 17 vehicles.

The sprint was the bestselling model. This found between 1984 and 1988 about 110 buyers. The open body looked like a mix of Lotus Seven and a traditional roadster. The super sport was derived from sport. A Rover V8 engine fitted to the vehicles. Between 1985 and 1988 created about eight copies.

The Sonnet was a variant of the sport with a more aggressive appearance. This had about five buyers between 1985 and 1988. The Thruxton appeared in 1985 and remained until 1988 on offer. It was an open-top racing sports car, of which only a single copy was made. The Serac of 1988 remained a unique piece. The last model was the Serac SS from 1989. Also, this coupe with engine from Toyota remained a prototype.

1989 ended production. In total, about 143 copies were created