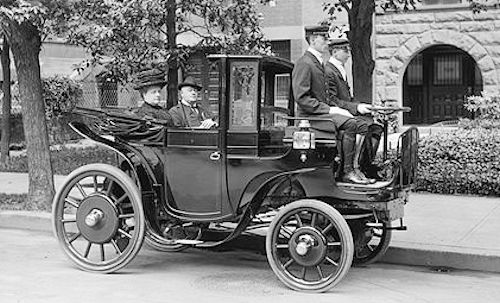 The Cologne Electricity Company (KEW) was a manufacturer of electric vehicles in Cologne .In 1898, the Cologne electrical engineer Louis Welter received a license to replicate the French Kriéger electric cars . In the same year he founded the General Motor Company for Motor Vehicles Allgemeine Betriebsgesellschaft für Motorfahrzeuge (ABAM)

The result was the Cologne Electricity Company (KEW) (formerly Louis Welter & Co. ).Also involved was the Ehrenfeld Waggonfabrik P. Herbrand & Co. and the Accumulatorenwerke Gottfried Hagen from Cologne-Kalk . Overall, the production of the electric vehicles proved not to be profitable, so that the ABAM 1906 returned the license to Kriéger and was dissolved in November 1907. In 1908, KEW discontinued production.

The ABAM built taxis with wheel hub electric motors . Their vehicles were used in many German cities, but also in Paris . The battery car cost ℳ 8000, -.

The KEW built mainly commercial vehicles, such as electric trucks, hotel buses and electric parcel wagons for the Reichspost . There were also a few cars, such as landaulets or motorcycles. These cars had their electric motors firmly installed in the frame. So they were more protected from shocks than the wheel hub motors. The smaller cars were built in the newly founded factory in Cologne-Zollstock , while the heavy cars were built in the wagon factory in Cologne-Ehrenfeld .