The Hudson Italia is an automobile styling study and a limited production two-door compact coupé that was produced by the Hudson Motor Car Company of Detroit, Michigan in cooperation with Carrozzeria Touring of Italy, and subsequently marketed by American Motors Corporation during the 1954 and 1955 model years. Designed by Frank Spring, and introduced 14 January 1954, the Italia was based on the Hudson Jet platform and running gear, but with a unique body and interior.

During the early-1950s, Hudson began several product development programs that included the Hornet, a six-cylinder engine, the Jet, and the project that became the Italia. The management at Hudson Motors sought the publicity that Chrysler received from their work with Ghia and the resulting show cars. The Hudson Italia concept was to replicate the notoriety of concept cars such as the Chrysler Ghia Specials (1951–1953) The original idea "was to create a fast, sporty car, based on the hotfooted Hudson Hornet" and also for competition in the Carrera Panamericana A flagship European-inspired experimental sports coupe that might rival Corvette or the then-new Thunderbird. The objective was to increase the Hudson's brand recognition and gauge public reaction styling ideas.

During development of the Hudson Jet line, chief designer Frank Spring wanted to bring a low-slung stylish car to Hudson's model range. Hudson's management "demanded ill-advised changes" that made the Jet look "dowdier" than Frank Spring had intended To compensate, they "gave the unhappy Spring permission to build an 'experimental' sports car based on Jet mechanicals. Spring was contemplating seeking employment at other design studios. He wanted to design a sports coupe that might rival the first six-cylinder Chevrolet Corvette or the then-new Ford Thunderbird, but with European inspired flair and grand touring luxury.

Lacking sufficient capital to develop a new model, Hudson reached an agreement for a prototype to be built in Milan by Carrozzeria Touring A complete Hudson Jet was shipped to Italy. A new body design, based on sketches by Frank Spring, was formed over a steel tubular frame This unibody system of aluminum panels was known as superleggera (equivalent to “very lightweight” in Italian), and "was expensive and fairly revolutionary in its day." The work done by Carrozzeria Touring was under the supervision of Spring and Hudson's vice-president, Stuart Baits. The Italia (coupes and one four-door prototype) was the only project that Carrozzeria Touring undertook for a U.S. automaker.

The price paid by Hudson for this concept car was reported to be only $28,000 It was a curious mix of Italian flair with American flash. After the prototype was completed in September 1953, Spring and his wife drove it around Italy.

The car was shipped to the U.S. to be displayed at numerous Hudson dealerships across the country by late 1953, and it received positive customer reaction. It was on exhibited at automobile shows in the U.S. and some in Europe, as well as at the International Sports Car Show held in January 1954.

This car first appeared under the "Super Jet" name and featured numerous advancements including its aluminum body, wraparound windshield (reminiscent of the 1953 Corvette), doors that cut 14 inches (356 mm) into the roof (also called aircraft doors) for easier entry and exit. In part because of Hudson's "step-down" floorpan, which dated to 1948, the Italia was 9 in (229 mm) lower than the Jet, but shared its 105 in (2,667 mm) wheelbase. The prototype also featured Borrani chrome wire wheels and its column mounted three-speed transmission included an overdrive unit. 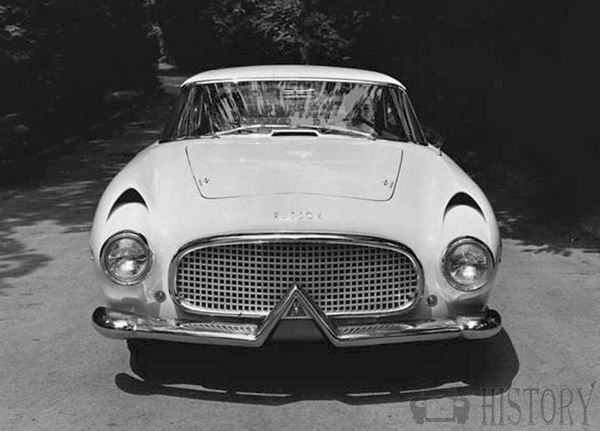 While styling for the Jet was conservative, the Italia was anything but. The Italia was 10 inches (254 mm) lower than a Jet. Over the headlights, the front fenders featured "V" shaped scoops, ducting cooling air to the front brakes, but they really only vent "the underside of the fender and the top of the tire." The front bumper sported a large inverted "V" (the trademark Hudson triangle, inverted) in the center that angled up and overlapped the grille work. Rear quarter scoops cooled the rear brakes. In the back of the car, the tail, directional, and back-up lamps tipped the ends of three stacked chrome tubes per side, emerging from scalloped cut-outs in the rear quarter panels. The production models did not receive overdrive, the instrument panel was different, and a combination of leather-and-vinyl upholstery was used.

The Italia featured a radio (not yet standard equipment even on Cadillacs) form-fitting bucket seats made from foam rubber three different densities for maximum comfort covered in red and white leather, featuring reclining backrests made up of two contoured bolsters, one for the shoulders and one for the lower back. The seats were firmer at the lower back than the upper and between the two cushions was air space so "the seats actually 'breathed' through the motion of the passengers." A non-reflecting dash was finished in red, with bright red deep-pile Italian carpet, all contrasting with the "Italian Cream" exterior color.Even red leather seat belts were incorporated as they were just beginning to appear as standard equipment that was pioneered by Nash but attached only to the seats themselves. Flow-through ventilation, usually credited as a General Motors innovation, feeding through a cowl vent (just becoming usual in 1950s U.S. cars), was also standard.

The Italia was powered by Hudson's "Twin H" 202 cu in (3.3 L) L-head straight 6, with higher (8:1) compression and dual one-barrel (single choke) downdraft carburetors, producing 114 hp (85 kW; 116 PS) and all were equipped with a 3-speed manual transmission with a column-mounted gear shift lever. The cars featured drum brakes front and rear. The trunk was accessible only from inside the car as part of a large luggage platform behind the seats with straps to hold cargo and lockable storage compartments on either side of the platform.

Hudson commissioned Carrozzeria Touring to build what is believed to have been a total of 50 cars, and sent the needed "Super Jet" components to Italy Despite lower labor costs in Italy, the hand-built car's price tag was USD$4,350 at the New York port of entry (POE) according to an AMC press release (undated) or $4,800 FOB Detroit, per a September 23, 1953, Hudson letter to dealers and as listed in the Motor Trend October 1954 issue. This was more than the a price of a Cadillac at that time (the Sixty-Two Coupe de Ville started at $3,995).

Hudson dealers began taking orders on September 23, 1953, but the response was lukewarm with only 18 or 19 firm orders. The Italia's price was high and dealers were disappointed that the more powerful Hornet engine was not offered. Less expensive were the $4,721 Nash-Healey, the $3,668 Kaiser Darrin, and the $3,523 Chevrolet Corvette.

On January 14, 1954, Hudson Motors and Nash-Kelvinator Corporation announced a merger to form American Motors Corporation (AMC). Hudson's prospects as a stand-alone independent marque ended with full consolidation under AMC by May 1954. The newly formed automaker sent letters to all Hudson dealers announcing a deadline for pre-paid orders from customers for the cars assembled in Italy. However, "orphan" branded cars, such as the Nash and Hudson, were shunned by customers and depreciated quickly. Orders for the Italia were almost nonexistent and AMC committed to have only another 15 Italias built.

The managers of the newly merged automakers at AMC had no intensions for the Italia to expand and further problems were encountered when Carrozzeria Touring refused to supply spare body and trim parts. Roy D. Chapin, Jr. "was the sales manager for the Italia program and was ordered to get rid of those cars."

Most of the Italias were sold to the eccentric customers in Southern California. Twenty-one of the 26 Italia's have been accounted for. The missing five cars carry serial numbers 5 through 10, with two in this group were located in Europe, thus leading to speculation that these early cars were never delivered to the U.S.Contemporary reports indicated that the cars were sold in Europe.

A single 4-door sedan prototype (dubed X-161 for Spring's 161st experimental prototype) powered with the Hornet engine was also constructed. This was a larger car delivering good performance and employed many of the features of the Italia, though its ornamentation was somewhat more subdued. It was also built in Italy by Carrozzeria Touring as a working prototype for Hudson's replacement of its Step-Down models. The X-161 is also described to be the last "real" Hudson 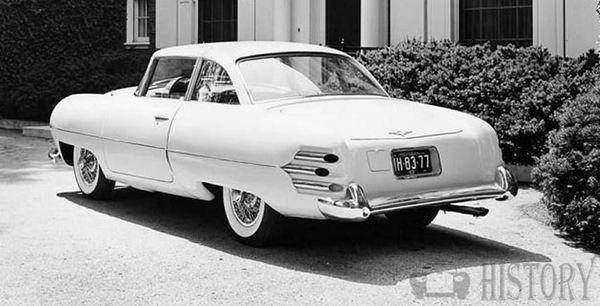