The Nash Rambler was a US automobile manufactured by Nash Motors , automobile division of Nash-Kelvinator Corporation , from 1950 to 1956.

Nash-Kelvinator Corporation's CEO, George Walter Mason , recognized that the company needed to launch more competitive models and insisted that a new car had to be different from existing models on the market. The Rambler was constructed smaller than most contemporary American cars, but also provided enough space for five people. The Nash Rambler created a new segment in the automotive market and is widely regarded as the first modern American compact car .

During development, the vehicle was originally given the name Diplomat at Nash . This name would have fit well with the previous models, since the "600" from 1950 Statesman was called and the Ambassador was the flagship of the brand. But Dodge had already reserved this name for a planned two-door coupe, and so Nash remembered his past and revived the name Rambler from 1902 again. The Rambler was then one of the most popular American cars. Likewise, the new Nash Rambler was highly respected during its entire production period 1950-1956.

The Nash Rambler was introduced to the 1950 model year. It was the brand's contribution to the so-called low-price segment dominated by models from Chevrolet , Ford and Plymouth . The Rambler was lighter and smaller than other popular cars. This allowed Nash to save on production material, and customers had the benefit of lower gas mileage. The car had 2540 mm wheelbase and was from a proven inline six-cylinder engine with 2.83 ltr. Displacement and L-Head (side valves) driven, which developed 82 SAE-PS (61 kW).

The new Rambler was also introduced as a noble 2-door convertible - referred to as " Landau ". The decision to offer this car model in a higher market segment with better equipment had been well thought out by Mason. First and foremost, he wanted to give the new Rambler a positive image. Mason knew the car would fail customers if they saw in it only a "cheap little car." He already knew what Crosley had just discovered in his mini-car series, and the Kaiser-Frazer Corporation had yet to learn on its Henry J model : Americans would rather buy a nice used car than a new car that is said to be of low standard ,

Other factors that played a role in Rambler's marketing strategy were the reduced supply of steel from the Korean War and Nash's profit maximization strategy. The desire to achieve the highest possible profit in sales meant that the Rambler in the initially expected low production figures in the price was significantly higher than the base models of the competition. To increase the value for the buyers, the cars were very well equipped. As with whitewall tires , electric timer and an AM radio with push buttons.

Just like the larger Nash models, the compact Rambler had rounded shapes and a pontoon body with complete wheel covers that also included the front wheels. However, this equipment did not affect the tropic of the car too much. Contrary to the customary practice of frameless side windows for convertibles, the Rambler had a fixed roof structure above the doors and side window frames. These metal structures served as guide rails for the opening, waterproof top. This design allowed Nash to use his monocoque body for the new compact car. She made the Rambler very torsionally stiff for an open car, without the additional body stiffeners required on other convertibles.

In 1951, the Rambler series was extended by a 3-door station wagon and a 2-door hardtop coupe. This was called Country Club .

In 1953, the Rambler was redesigned for the first time, looking very much like the larger Nash models that received the new "Airflyte" styling last year. A 2-door sedan was offered from 1953 additionally. 1954 came a 4-door sedan and a 5-door station wagon - called "Cross Country" - in addition. The 4- and 5-door had a wheelbase of 1743 mm. From 1955 the front wheel cutouts were no longer covered.

On January 14, 1954, Nash merged with the Hudson Motor Car Co. to American Motors Corporation (AMC). As a result, the Rambler were also offered as Hudson Rambler at the dealers of this brand. Both models were identical.

For 1956, American Motors designed a brand new Rambler. They chose a wheelbase of 2743 mm, and the vehicle got longer. Again, the Rambler was sold as Nash and Hudson. It only came with 4 and 5 doors. In addition to the sedan and the station wagon also a new, 4-door hardtop sedan was offered. In addition, the Rambler was the first car that existed as a hardtop station wagon. Rambler became an independent brand in 1957 ; the names Nash and Hudson fell away. Also from 1957 V8 engines were available in the Rambler. It was AMC 's self - developed 4.1 - liter engine that was introduced the previous year in the Nash Ambassador Special and the Hudson Hornet Special. Only in 1957 was a special high-performance hardtop sedan called Rambler Rebel . This car had the new 5.4 - liter V8 engine from AMC. In the larger cars of the group, the Nash Ambassador and the Hudson Hornet this year, this machine was also used. It was planned to equip the Rebel with a port injection , but cold start problems prevented this use in the last minute. The Rebel, which was made only in small numbers (1,500), was a precursor of the muscle cars that became popular in the 1960s.

From 1958 Rambler was the only brand of American Motors Corporation, after the brands Nash and Hudson were abandoned. The smaller model was now offered as Rambler American , the larger, introduced in 1956 model was first Rambler Six (or Rambler V8), from 1961 then Rambler Classic . 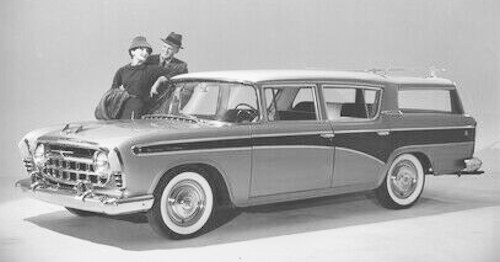