The Renault 11 is sold from April 1983. It is the hatchback (3 and 5-door) Renault 9 (4 doors trunk), launched in September 1981 and voted " Car of the Year 1982 ". Distinction being equipped with advanced techniques for the time. It has the specificity of having a digital counter, with voice synthesizer , as well as a hi-fi system that can be controlled from a control satellite.The Renault 9 and 11 were designed by Robert Opron ( designer of Citroen GS , SM , CX , Fuego , Renault 25). The dashboard of the Renault 11 is different from that of the Renault 9, in order to integrate the specific equipment of the "Electronic" versions. This dashboard and the interior of the Renault 11 are designed by Marcello Gandini, which will resume this style of dashboard with big cap for the Renault 25 and the Super 5 .

In December 1982, the Auto-Journal published photos of the new Renault 11 running on a test circuit. In the article, the journalist is already talking about a project of digital dashboard, however no picture of this handset will be disclosed before the official release.

The Renault 11 TSE / TXE / Automatic "Electronic" are the first French cars equipped with a digital dashboard (Stanley brand for the 3 series, the left handset, with the buttons is Jaeger brand) and synthesis voice  : the first in the world having a digital counter being the Cadillac Seville in 1978, the second in France being the Citroën BX "Digit" (1985) and the Renault 21 TSE / TXE / Turbo DX (1986). Note that in 1981 the Simca-Talbot Horizon "S" was already equipped with a linear LED tachometer on the steering column, which was then replaced by a 2-digit digital tachometer.

The Renault 25 will also resume voice synthesis and the first versions of the Peugeot 505 Turbo. Renault will remain faithful to this technology for a long time.

It is also the first Renault to be equipped with the famous control satellite behind the steering wheel of the hi-fi system , since taken over by many manufacturers.

The famous digital LCD was invented by (Japanese) engineers who were looking for a way to limit unnecessary glances on the conventional needle meter. Simplifying the information as much as possible while keeping all of their contents, the meter adopts simple means of displaying information. On the main display: speed, engine speed (or, alternatively, a speed graph capped at 90  km / h or 180  km / hon the 1 & 2 series), engine temperature, fuel level (at the oil level contact, at the oil pressure demand on the display, on the left) in the form of variable height columns, only one quick scan of the look to see the information. The disadvantage of this type of meter is the low readability by high iluminosity, which partly overcomes the cap above the dashboard.

There were 3 types of digital counter:

The "satellite" right exchange control between the second and 3rd model: on the second there is a recall button ads by speech synthesis. On the 3 , there is a computer scroll key panel. The left board is also different between the second and 3rd model: speed bar graph no longer exists, this command will disappear in favor of a key "mph / km / h". This last meter will also equip the "Encore" (US version of the R11 with nevertheless changes in the warning lights and early warning).

Renault will then offer this type of counter on the Orange 21 TSE / TXE / Turbo DX orange (coupled with voice synthesis on the first models).

Citroën will market a Citroën BX "Digit" with a specific Jaeger digital counter in 1985, which combines a finish of BX 16 TRS with the engine of the BX 19 GT (105 hp).

Overall, at that time, digital meters did not convince, at least in France, the press that often decried this type of dashboard. In Germany they were better received, while in the United States and Japan they were acclaimed. This counter is the most successful and aesthetically most successful of all digital dashboards proposed during the 1980s.Some body colors are reserved for TSE / TXE / Automatic Electronic, while some are forbidden. These always have a black double side stripping.

The Renault 11 TSE Electronic is marketed at the launch of the R11. It is endowed with the mythical "  Cléon-Fonte engine  ". This engine is of old design, since it has a camshaft (with rockers and rocker rods). This engine, designed by engineer René Vuaillat , appeared in 1962 on Renault Florida S and Renault 8 . On the R11 TSE Electronic it is a 1 397  cm 3 (type C2J ), powered by a dual body carburettor Weber 32 DRT, developing 72 ch DIN, with AEI (Full electronic ignition).

For the 1984 vintage (July 1983), the silhouette of the car drawn in orange on the right of the digital meter, indicating the open opening (door not closed properly, bonnet unlocked, chest not closed, grilled bulb detector), is replaced by a computer with a green background.

In the fall of 1983 Renault launches new petrol engine, the "  engine E  " of 1721  cm 3 (type F2N) with double Weber carburetor body 32 and DRT AEI (integral electronic ignition), whose base is that of the engine 1 F8M , 6D. It has a diesel type architecture with combustion chambers built into the pistons, which is not common on a gasoline engine. This new engine is intended to replace the good old  Cléon-Fonte engine On the more powerful versions of the R9 / R11 range, excluding Turbo versions. This new engine is modern in design with a camshaft in the head, driving a timing belt, and a carburettor feed. With the F2N, the GTS becomes the GTX, the TSE becomes the TXE and the TSE Electronic becomes the TXE Electronic. At first, the GTS, TSE and TSE Electronic versions are maintained alongside the GTX, TXE and TXE Electronic.

The Renault 11 TXE Electronic, apart from the engine, is identical to the TSE Electronic.

For the 1985 vintage, it loses its tweeter located on the meter cap, the latter is replaced by the front left speaker of the car stereo, allowing better sound quality of the speech synthesis.

For the 1986 vintage (July 1985), the R9 / R11 range undergoes a slight restyling. The Renault 11 adopts a modified grille with large barrettes anthracite color and no surround chrome, a front bumper with integrated spoiler similar to that of the R11 Turbo and new center console thinner on the inside to increase the legroom . The Renault 11 TXE Electronic adopts a new digital counter more resistant to heat (the bar graph integrates more than the tachometer and does not make more recall speed on 2 scales), as well as a sport steering wheel with four branches sheathed of leather, similar to that of the Renault 9 Turbo and Renault 11 Turbo (but removal of the buttons for setting the overspeed alert).

The April 2, 1985is marketed a limited series "Renault 11 Electronic" to 4,500 copies. It takes again the dashboard "futuristic" and the synthesizer of words of the famous R11 TSE / TXE Electronic, but with a more stripped finish. Based on GTL, but with a " CHES / TSE / TSE Electronic " engine of 1,397  cm 3 72 hp DIN, it has tinted windows and rear wiper. It is available only in five doors with 2 colors available (Schiste Blue 402 or Metallic Gray 620), it has full R11 GTX carousel hubcaps and R11 TSE / TXE Electronic type radio antenna. This is the second generation of meters that will equip this version. No options available .

In this version, speech synthesis takes the first loudspeaker system under the cap, the vehicle is not originally equipped with a car radio.

A North American version will also be marketed, the Renault Encore Electronic which is the off-shore version of the Renault 11 Electronic. This version is not an available model, just an option of an already existing model. This version takes the third generation of French meters. The witnesses on the left, however, are different (presence of a witness for belt not looped obligatory in the United States as well as a buzzer of forgetfulness of the keys on the contact). No hi-fi system and no speech synthesizer. It seems that this version does not benefit from the outside temperature. Calculation in "imperial" measurement, Miles, and consumption in MPG. Inscription " unleaded Fuel Only " below the tachometer. 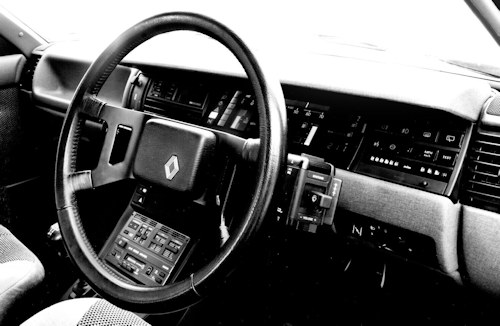