The Renault 25 is  a 5-door hatchback and rear sedan model car designed and produced from 1984 to 1992 by the French manufacturer Renault .

The history of the Renault 25 begins on November 20 , 1983 .When it was released in 1984, the 25 represents on all plans a very clear progress compared to the 20 and 30 it replaces. The performance is largely competitive, with the V6 turbo  Thanks to the excellent aerodynamics, consumption is among the lowest high-end models. Well-designed undercarriages, cured of the excessive flexibility of 20 and 30, offer a lively and healthy handling, barely tempered by a slight tendency to understeer and by strong torque effects on the V6 turbo. The comfort of the interior, clear, spacious and well soundproofed is first-rate even if the modern design of the dashboard (due to the Italian designer Marcello Gandini .The equipment includes the impulse control of the driver's window, speech synthesis and one of the first controls car radio steering wheel via the "satellite"..

Unfortunately for Renault , these ambitions will be wiped out by a manufacturing quality close to the catastrophic during the first three years of marketing. The multiplication of breakdowns (especially on the electronics side) and assembly faults of all kinds, combined with the casual attitude of an after-sales network A "limousine" version, extended by 25  cm , was designed by Heuliez and marketed between 1985 and 1986 , in particular adopted by the Presidency of the Republic . 832 vehicles were produced.

The 1988 facelift (new front, new rear lights, new interior materials, slightly revised front axle) and the arrival of more powerful engines will allow the Renault 25 to withstand the arrival of Peugeot 605 and Citroën XM in 1989 The end of the career comes in 1992 when sales are still at an honorable level, especially in 4 cylinders. Given the mixed commercial success.The good resistance of the body to corrosion (a first for Renault) and the robustness of the four-cylinder engines contributing to it. However, the age of models may include stiffness of defects such as difficulty closing rear doors or cracks windshield when put on jack .The Renault 25 stops on October 13, 1992 with 780 976 sold  and last model out of the production lines. The GTS versions in PH1 and Turbo D in PH2 were the most sold variants. The Renault 25 partially served as a basis for the Renault Premier (now Eagle Premier and Dodge Monaco after the sale of American assets of Renault to Chrysler in 1987 ) in the United States . The Premier took over the doors and some mechanical parts of the 25 on a Renault 21 platform (chassis and suspension).

Its original line with a curved rear window called "bubble", due to the stylist Robert Opron , with the complicity of Gaston Juchet , aims to give the 25 the appearance of a sedan classic trunk to overcome the reluctance of customers to with regard to the hatchback on the external markets.

It is one of the first cars designed from the beginning to minimize the air resistance and thus reduce consumption. The TS model will even briefly hold the unofficial title of the world's most aerodynamic series car with a Cx(coefficient of penetration into the air) of 0.28 .The range has never featured all- wheel-drive models and all versions are front-wheel-drive.

The engines (4 cylinders in line or V6 ) are located longitudinally in front of the front axle.All Renault 25 were produced in the factory Renault in Sandouville  near Havre .The average consumption is 7 to 13  liters per 100  km depending on the version. Its braking is provided by front discs and rear drums (on 4-cylinder models without ABS ) or front discs and rear discs for other versions. The dual circuit is servo-braked. 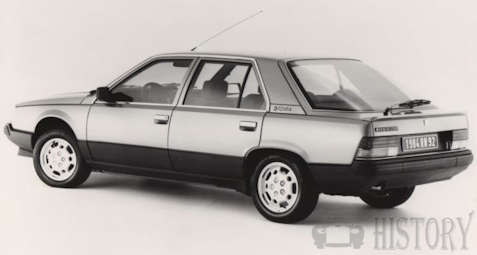